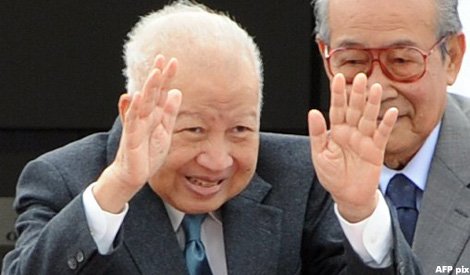 Cambodia’s former king Norodom Sihanouk, whose life mirrored the turbulent history of his nation where he remained a revered figure, died in Beijing today at the age of 89.Sihanouk, who had been a frequent visitor to China where he received most of his medical treatment, died of a heart attack, according to his longtime personal assistant Prince Sisowath Thomico.“He was brought to hospital and died shortly after,” he told AFP of the former monarch who abruptly quit the throne in October 2004 in favour of his son, citing old age and health problems.“It’s painful. I am full of sorrow,” Prince Thomico said. “King Sihanouk did not belong to his family, he belonged to Cambodia and to history.”The former king had been staying at his Beijing residence since January. He would have been 90 on Oct 31.

“The royal government of Cambodia will bring his body from the People’s Republic of China to Phnom Penh to hold a funeral at the royal palace according to our traditions,” said a government announcement read out on Cambodian television.

Sihanouk had fought a long battle with health problems that dogged his final years, including cancer, diabetes, hypertension and heart problems.

Despite abdicating in favour of his son Norodom Sihamoni, the ex-monarch remained hugely popular in his country. His portrait still adorns public buildings and many Cambodian homes, and he used his website to communicate with the outside world.

In a message in January, he said he wanted to be cremated upon his death and have his ashes kept in an urn inside the royal palace, reversing an earlier wish to be buried.

Cambodians woke to the news of their former monarch’s demise on the final day of the annual festival for the dead, known as Pchum Ben, when most people leave the capital Phnom Penh to spend time with their families in the countryside.

Dead ancestors are believed to emerge to walk the earth during this time, and they are honoured with prayers and food offerings at Buddhist pagodas.

Prince Thomico said he believed Cambodians would find it “significant” that Sihanouk had died at the conclusion of the 15-day festival.

“He was a good king and watched over the country and the Cambodian people. I liked him very much,” said 94-year-old Ching Sivheang.

Sihanouk was placed on the throne in 1941 at the age of 18 by French colonial authorities.

Twelve years later he gained Cambodia’s independence and shortly after quit the throne for the first time in favour of his father Prince Norodom Suramarit to pursue a career in politics.

Sihanouk served as premier half a dozen times, repeatedly leaving the post with a characteristic flash of angry theatre over perceived slights, until finally becoming “head of state” following the death of his father in 1960.

He was toppled in a US-backed coup by one of his own generals, Lon Nol, in 1970.

Sihanouk then aligned himself with communist guerrillas Khmer Rouge.

The hardline communist movement used him as a figurehead as they seized power before putting him under house arrest in the royal palace with his family during their 1975-79 reign of terror.

He regained the throne in 1993, having helped push for peace.